03.12.2020 | Stop the State-sanctioned violence against Cuban artists and journalists 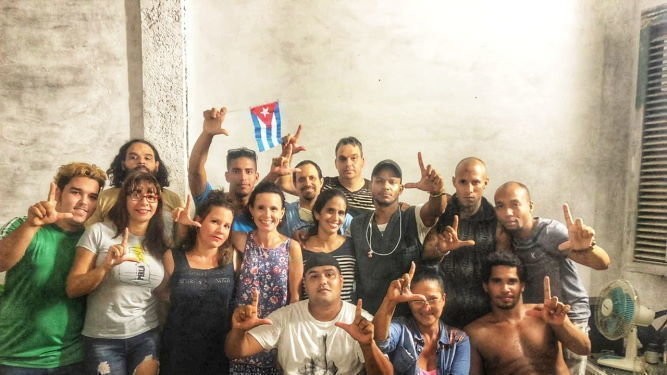 Please support the petition for the Cuban artists and journalists: https://www.change.org/p/presidencia-de-cuba-stop-the-state-sanctioned-violence-against-cuban-artists-and-journalists

UPDATE 02/12/2020 Coco Fusco: This morning, Cuban artist Tania Bruguera was threatened once again by state security agents for her role in the historic November 27 meeting between Cuban artists and state officials about state repression of the cultural sector. Cuban journalist Carlos Manuel Alvarez, who has been reporting on the hunger strike by art-activists that preceded the November 27 meeting for El País and The Washington Post, is being demonized on Cuban state media. These intimidation tactics are likely to be a prelude to formal charges being brought against both of them as well as others, followed by arrests and possible imprisonment.

Both Bruguera and Alvarez are being called mercenaries paid by American foundations and state agencies to destabilize the Cuban revolution. Other artists that were involved in the November 27 discussion are also being targeted by Cuban state media. Among the original group of Cubans that declared a hunger strike in protest of the arrest of rapper Denis Solis, several are still under house arrest. Luis Manuel Otero Alcantara, one of the hunger strikers, was just arrested again today after daring to walk outside. Many will say this is just a Cuban issue, but it is not. I am asking Americans to stop pretending that your silence has no political consequences. Bruguera and Alvarez are among the best-known Cubans outside the country and are being targeted precisely because they are known in the United States, precisely because they have been supported by the American institutions. This is indeed an American problem as much as a Cuban one.

We are asking the Cuban government to immediately stop the State-sanctioned violence and harassment against independent artists and journalists, as well as activists. We are asking art and cultural institutions, as well as individuals to stand in solidarity with the San Isidro Movement.